The title implies that Italy smells—it does not. Italy is full of enticing aromas. A lot of my trip was spent in the Tuscan and Umbrian countryside where jasmine perfumes the air in the most intoxicating way. I think it’s because the sun warms the flowers all day. Rosemary and basil flavor the air. Lavender is everywhere. I love to cook with lavender and while in Italy I made simple syrup. Lavender sweetened the air in our villa and tasted fantastic in our drinks! 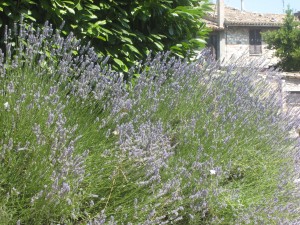 On the coast, we were treated to tangy sea air. Along with that came the scent of deep fried seafood, and of course, the coconut of suntan lotion.

While all of the above smells are still firmly in my memory, some of the sharpest smells came from food. I’ll never forget the strong aroma of espresso, or the smell of spun sugar that escaped the gelato shops and found its way out into the cobblestone streets. No wonder so many people eat gelato!

There’s nothing like the scent of rich red wine as it swirls in the glass. On market day, the scent of smoked meat rolls off the meat and cheese truck, calling the market goers in for a fat sausage, wedge of cheese, or slices of prosciutto.

Most of the churches in Italy hold a musty smell of days gone by, but I found the smell comforting. There is so much history in Italy’s basilicas and duomos. The old, musty smell conjures up a feeling of peace for me.

Italy is very clean. In fact, we were amazed at the community garbage system we had while at the villa. Because the roads are so narrow, homeowners must take their garbage to town, to one of the many dumpsters available, and dispose of it. From there, the garbage truck collects the garbage. They do this often, maybe daily? I never smelled garbage or saw garbage on the street, even the city.

If I had to pick one smell that described Italy most I’d probably say the simple scent of the air. In the evening the wind whips all of the outdoor scents together, the rosemary, lavender, the dry grasses—for me the scent was like nothing I’ve smelled at home. I asked my husband what he remembered most about Italy’s different smells and he said the air, so fresh and fragrant. I was surprised to find we both picked the same scent.

If you go to Italy, take the time to notice the many smells. You won’t be sorry. In fact, I bet you’ll be as in love with all the different scent sensations as I was!